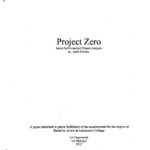 “Why I do it: I believe in challenging the status-quo. I believe in the power of creativity. I believe in the importance of the individual, and the potential of the collective. These beliefs are the primary motivating forces for what I have dubbed 'Project Zero'. How I do it: On the day of my high-school graduation I asked one of my professors if he had any advice, and he told me the key to success is a solid understanding of the power of multiplication. Since that day I have witnessed this power reshape the world and its people in a variety of ways. Fear, hope and even capital have been the product of successful multiplication and replication tactics. This, and studies of phenomenology, memetics and virology have influenced my artistic approach. Virology is the study of viruses. The Spanish Flu was one of the largest pandemics the human race has ever endured causing upwards of 100 million deaths. In 2008 the World Health Organization confirmed 566 human cases of H5N1, a sub strain of the influenza A virus (avian flu) and further speculated that should this sub strain mutate again we will witness a pandemic on par with the 1918 Spanish Flu. Put simply, memetics explores how ideas, behaviors, and style spread between individuals within a culture. Consider "Occupy". Within a month, the Occupy Movement, among similar protests around the world, inspired 96 cities across 82 countries (and 600 cities in the US) to actively take part in their governments; making it ‘America's first true Internet-era movement’ (Journalist Douglas Rushkoff) For our purposes, phenomenology deals with the manifestation of meaning through our modes of perception- in this case, "buy our product". Over 620 billion dollars is spent on advertising each year. By the end of 2011, internet advertisers made approximately 7.88 billion dollars in revenue, a 22% increase from the previous year. With Project Zero, I wish to mimic these successful tactics to demonstrate just that: they are merely tactics. Regardless of intent, the ideas of multiplication and replication work. However, for the most part these tactics are being used to co-opt our attention in chiefly negative ways. What I do: I strive to use these methods to communicate a message that has functioned as both my greatest fear and my greatest inspiration: the power of human kind. With this in mind, I play with concepts of image and symbol and use my art as a phenomenological and memetic experiment intended to directly engage my audience physically and mentally, with both the art and their surroundings. Formally, I use my strategy of replication and multiplication as my content. I use the silhouettes of many figures to combine and make a much larger figure. The ability of the smaller figures is multiplied and compounded as the collective combines to achieve something much larger. In this case, the figures as a collective stake claim to public creative expression via spray paint. In an effort to make the proliferation of the image self sustaining, I have posted the high quality images on the internet under the Creative Commons License for anyone to download and manipulate. I believe a culture that shares their creative wealth is a much stronger culture.”