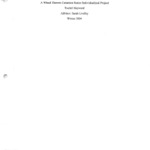 "In making ceramic pieces, I have found that I am drawn toward creating functional work and that I particularly like lidded pieces for the specific relationship between the lid and the body of the piece. I have also learned that focusing only on the way in which a piece will be used can limit the variety of pieces I produce and can ultimately lead to less interesting results. I wanted my Senior Individualized Project to capitalize on my strengths as a potter but also to allow me flexibility to explore work that was not necessarily restricted by an emphasis on function. The concept for my project began with the idea of creating forms that stacked to build a larger form, which dealt with my interests in specificity and fit. My exploration of fit gradually expanded to include pieces that fit together in more than one dimension. I chose to focus on the visual appeal of the larger form rather than on function, but many of my smaller components were still intended to reference or serve as functional pieces. My goal throughout the eleven weeks of the project was to create the best possible form: to make the most interesting and appealing use of the concept of fit."