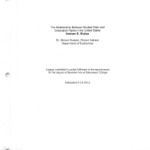 Student debt has consistently increased in the United States the past few years and has become the largest source of debt. Furthermore, tuition has steadily increased while the federal and state governments have cut grants for college students. As college becomes more expensive, it is necessary to understand the impact of student debt on those who choose to pursue a college degree. This study attempted to determine the relationship between student debt and graduation rates at institutions in the United States. Using the Department of Education College Scorecard, it used two ordinary least squares regression models to analyze the effect of average student debt and the percentage of students with federal student debt on the graduation rate of an institution. The two independent debt variables were regressed in separate models. The results found a negative relationship between both debt variables and the graduation rate at an institution. This implies that institutions with a lower average debt total are more likely to have a high graduation rate. Institutions with a lower percentage of students taking out federal loans also were more likely to have a high graduation rate. It was concluded that student debt is not the most effective form of financial aid and that new policies should model those of elite institutions, where the bulk of funding comes in the form of grants.