Does Hosting a Mega Event Positively Impact a Nation's Economy? 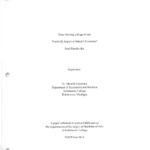 The purpose of this paper was to determine whether a country, by hosting a mega event, may experience positive or negative effects on their national unemployment rate, and on two figures related to trade—exports and imports. The shock of a mega event can be seen as a sort of policy, so an interrupted time series analysis was used. Data for these variables were collected for three countries that hosted mega events: Australia, Greece, and South Africa. This paper used an ARIMA (Autoregressive Integrated Moving Average) Auto regression model to analyze the interruption of a mega event on time series data for the variables in question. After running the results, only one observation was deemed significant at the95% level: Australia's exports at the 1year level. The remainder of the observations were not statistically significant, implying the limited impact of a mega event on a nation's economy. IV