Who Pays : A Comparative Analysis of Monetary Legal Settlements : Cases of Police Brutality 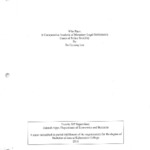 Using a comparative analysis between the United States and South Korea, this paper attempts to analyze the police brutality as a market failure caused by principal-agent problem and asymmetric information. For the qualitative part of the research, court cases are analyzed to corroborate the hypothesis that the market failures in two countries are drawn from a combination of disparity in informal social control and the principal-agent problem. Using the panel data analysis, the independent variables of the following: number of officer-involved shootings, number of property crimes, number of violent crimes, and number of sworn officers were used to run the fixed-effects regression against the monetary settlement, which was the compensation given to the victim involved in the officer-involved shooting. Except for the number of shootings, the other three independent variables were found statistically significant with expected signs of coefficients. The number of property crimes and the number of sworn officers had a positive relationship with monetary settlement. The number of violent crimes had a negative relationship with monetary settlement. The number of shootings could have been found statistically significant if the data was more complete. Market failures in both countries could be rectified by the transfer of liability. If the monetary responsibility in the result ofa shooting transfers from the principals to the agents in the United States, and from the agents to the principals in South Korea, the total number of deaths caused by officer-involved shootings is expected to decrease.