Space and Place in Public Libraries: An Anthropological Approach 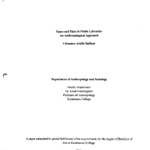 Libraries always reflect the social and cultural contexts of the past and present, even though many people think of a library as nothing but a repository for books or even for pure knowledge. In the early twenty-first century in the U.S.A., libraries are increasingly reflecting an international context in which many immigrants or their children are in contact with local public libraries. This research project attempts to answer four questions. What is the relationship between libraries and a democratic society? How are libraries transforming in the digital age and/or in the face of the Internet and new technologies? To what extent and how do libraries produce social capital and address (or fail to address, possibly even worsening) the digital divide? And how can we think about libraries as place and space in the anthropological sense? Public libraries have played a role in democratization of many societies, but they have also been used as means of restricting access to social benefits. The Internet and new information technologies are the most powerful agents of change in public libraries in the early twenty-first century. Public libraries have sometimes helped certain social groups earn social capital and they continue to do that, but other social groups can be left with less social capital either because they are not library users or because they are not skilled in new information technologies. Anthropological studies of space and place, especially the way they reflect hegemony, are useful. The conclusion is that public libraries would be more supportive of democratization if library staff and patrons were more aware of the ways that space and place in libraries have been both pro-democracy and anti-democracy over more than a century.