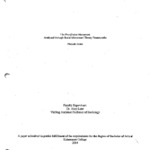 This paper explores the Pro-Choice movement between 1973 and 1990, through the lens of Social Movement Theory. The exploration of Resource Mobilization Theory, Political Process Theory and New Social Movement Theory offer differing lenses in which to analyze this movement. By examining the tactical and structural approaches of the Pro- Choice movement, between 1973 and 1990, the political nature of the movement grew. After Roe v. Wade the movement was able to capitalize on the momentum and political opportunities to become more professional and institutionalized. Political Process Theory offers the most compelling analysis of the Pro-Choice movement because it helps to explain the new capitalization on political opportunities, use of mobilization structures and new framing of the movement. The other frameworks fall short because of their lack of emphasis on the political system.