In What Ways Does A Biased Discipline Structure And Predisposition Among School Authority Figures Lead to the Self-Fulfilling Prophecy? 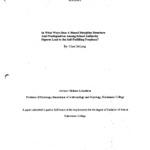 On September 23rd, 1954 the decision was made to force integration or desegregation of America's public schools. It was now considered unconstitutional to have separate schools for Black and White students. However, literature today suggests that this decision made in the Brown v. Board of Education court case was detrimental to colored children and had a negative impact. In fact, there is plenty of literature to support that this decision contributed to the current discipline and achievement gaps. People also believe that this decision is the reason we see racial imbalance among certain careers and graduation rates today. Foucault describes the Panoptic gaze as the foundation to our understanding of discipline. He believed a person was more likely to behave and follow directions when they felt they were being watched constantly. The Brown v. Board of Education decision placed children of color in schools where they were an unwanted, unappreciated minority. This made them a target for discipline more frequently, and they also received harsher punishment. It becomes understandable that this racial bias shaped the foundation of today's discipline structure, and how authority figures in schools would react to colored students differently than the White students. This paper explores what the discipline and achievement gap are, how factors such as parental education socioeconomic status, home life, school involvement, and the student code of conduct influence decisions made by authority. It will also explore how the combination of inherent bias and a biased discipline system can impact different authority figures disciplinary decisions.