Research for Revolution : A Critical Investigation of Study Abroad Literature 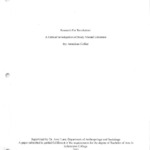 In recent years, Americans have become obsessed with increasing the number of students who participate in study abroad. Actually increasing the number and diversity of study abroad students has presented a major challenge in educational circles. The persistent dominance of white, female U.S. students in study abroad demographics suggests that the study abroad as an institution, and study abroad research in particular, face systemic issues which prevent study abroad experiences from facilitating their stated goal of intercultural competence. This project is an attempt to illuminate those systemic issues in order to improve the conceptualization of study abroad within the literature. The review of the current literature has resulted in the identification of four faulty assumptions which pervade study abroad research, as well as the importance of structuring critical reflection into study abroad experiences as a way to promote intercultural competence. This work represents an important first step in dismantling research practices which perpetuate white-supremacist, capitalist, patriarchal structures.