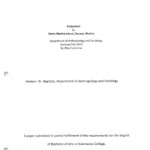 Through interviews and observations, the purpose of this project was to investigate the impact (e)migration is having in Santa Martha Latuvi, Oaxaca Mexico. Latuvi is currently experiencing transformation in its economy and political/ organizational structure due to high (e)migration rates in the community. Change in the economy has been beneficial while the political/ organizational structure stands at a disadvantage due to decrease in population. Links have been created for emigrants to remain a part of the community, however, those who do not pursue the links, lose their citizenship in the community. Economically wise, the community, as community members stated, "has improved" due to the incoming contributions from members residing outside of Latuvi. This outside contribution has allowed families in Latuvi to "better" their living conditions; the most common example was, housing remodels. Most citizens from Latuvi migrate to Oaxaca City, Mexico City and Los Angeles, CA. Most recently, the state of Monterey has become the newest destination for Latuvi citizens. Tijuana is another destination but not as common. The lack of citizens, specifically men, in the community has drastically affected the community's organization and its political structure. Leadership postions in the community have been eliminated because men are not available to fulfill them. At the same time, this action highlights the presence of gender inequality in Latuvi. The decrease of men has yet to allow women the opportunity to pursue political roles in the community. Due to the high (e)migration rates to Oaxaca City, Mexico City and LA, Latuvi organizations have been created in these three cities with the purpose of allowing Latuvi (e)migrants to remain Latuvi citizens even if they are not physically present in Latuvi. However, not everyone who has emigrated from Latuvi actively participates in an organization. As an emigrant from Latuvi, this reality was something the author did not expect. This reality puts in question the concept of "belonging" for emigrants who are not part of these organizations. The author concludes by analyzing the impact (e)migration is having on gender roles, Latuvi's organizational/ political structure and how it questions "belonging" for emigrants who do not have ties to the organizations of Latuvi.