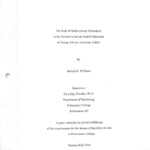 The current study aims to examine the extent to which young African-American adults are transmitted the various sexual socialization discourses through the media, as well as, determine which sexual socialization discourse is associated with subjective sexual health outcomes among young African-American adults. It was hypothesized that the most prevalent sexual message in the media will be sex-positive messages followed by relational sex messages and abstinence messages, as well as, that higher levels of exposure to sex positive messages will be correlated to higher levels of sexual assertiveness and condom use self-efficacy in participants. A sample of 503 African-Americans (73% female) aged 17 to 27 years (M= 19.77, SD = 1.79) were used in the current study. Results determined through descriptive statistics support the first hypothesis; participants reported the highest level of exposure to sex-positive messages (M - 2.01, SD = .65). Results generated from a Pearson r correlation did not support the second hypothesis; there was no association between the level of exposure to sex-positive messages and the level of sexual assertiveness (r=.02, p=.82) or the level of condom use self-efficacy (r- .04, p = .69) reported by the participants. However, a significant finding was revealed during analysis; there was a negative correlation between participants' exposure to relational sex messages and their self-reported levels of sexual assertiveness {r =-.20, p=.03). The significant result of this study has determined that young African-American adults feel less sexually assertive when they have been exposed to relational sex messages. This finding is concerning in regard to the sexual health of young African-American adults because it states that young African-American adults feel less confident about expressing their sexual desires and discomforts with their sexual partner when exposed to messages that communicate that sex is only for individuals in loving and monogamous relationships.