The Use of Animation as a Pedagogical Agent 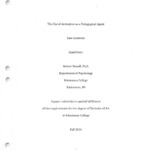 Populations of fourth grade students were exposed to two different types of animated educational videos in which the primary differences were the use of unnecessary motion and imagery. The students completed a test on the material provided, as well as a questionnaire on their interest in the video and their desire to learn more. The lesson the videos taught was about Classical Conditioning, using Pavlov's example of a dog being trained to drool to the sound of a bell. The experimental video used a moving character and featured dynamic transitions between visuals. The control video used still images from the experimental video but featured no form of movement or any images that did not relate directly to the lesson being taught. The study was performed with the intention of determining whether a student would better understand the lesson, be more engaged by the material, and become more interested in learning more about the subject through the use of expressive animation. The results showed that students who watched the animated video were significantly more engaged that those students who watched the still image video; however there was no significant difference between the videos in terms of the students' information retention. From these results it can be determined that the animated video did have advantages over the still image video in terms of pedagogical engagement without any discernible drawbacks.