Current Distributions of Resistor Networks : An Analogy to Information Flow 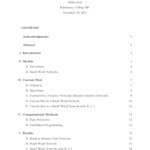 This paper details the methods, models, and results of this two part project. The premise of this project is that the information flow between two points in a network can be analogous to the current flow between those two points, given the voltage of those two points and the resistance of the link connecting those two points. The first part of the project was computing the critical exponents for the percolation conductance models. Computing these critical exponents would show if our computational methods were precise, building the foundation for the computational methods used for the second part of the project. The second part was calculating current flow distributions for the Small World Network model. The methods we used involved computational relaxation methods based on Kirchhoff's Current Law and Ohm's Law, applied to a large random resistor network for several iterations. The results from the percolation model indicated that our computational methods were correct, since the critical exponents that were calculated coincided with other researchers' results. The current distribution results revealed that the shape of the current distribution was not affected by the parameters of the system. Each current distribution was more or less a normal Gaussian shaped bell curve. This led us to conclude that the Small World Network system exhibits behavior similar to that of the Central Limit Theorem.