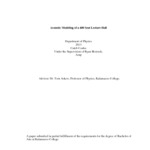 Classroom acoustics are very important to students and professors alike. The ability to convey speech is very important to both speaker and listener. A room with poor acoustics can hinder learning. This study examines the reverberation times and speech intelligibility in a college lecture hall. These properties are studied on-site with physical equipment and with a computer simulation of the hall in CATT-Acoustic software. Before the computer model could be utilized, it was necessary to modify it to include several key details not found in the first version. The site was studied directly using equipment to generate a sweep of sound from low to high frequencies. The response of the room reverberating was recorded. This sound was de-convolved to generate the impulse response of the room and record the reverberation times. The speech intelligibility of the room was also found using this technique. Once the computer simulation of the lecture hall was fixed, it was used to mirror the experiments run in the hall itself, and these results were compared. The results matched, so the computer model is considered complete. This project supports the decision to renovate the space by pointing out the room’s deficiencies by observation, experimentation, and provides in the computer model a valuable analytic tool for studying the room’s acoustics.