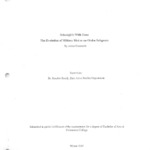 The author examines a fusion subgenre of Japanese anime and manga otaku: military moe. Although it was only solidified as a concept in the mid-2000s, military moe anime and manga have exploded in popularity over a relatively short period of time. This paper aims to give a comprehensive history of military moe's creation, as well as brief analysis of important pieces of media. The author considers why military moe, which bears little surface resemblance to traditional military otaku media, was able to find success among a subset of military otaku.