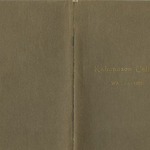 The record of war service of graduates, students, former students, and faculty of Kalamazoo College lists those who served in the Army, Navy, and Marine Corps as well as in civilian war service and welfare organizations during World War I. It also includes those men who were enlisted in the Student Army Training Corps at the college and those who made the supreme sacrifice.