The Growing Edge of Possibility : Genderqueer Identity and the Reconfiguration of Gender Recognition 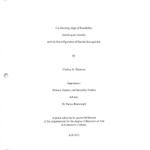 Genderqueer identity, or gender identity that is not constructed in relation to the gender binary of woman and man, is becoming increasingly visible in the contemporary social sphere. Yet, due to the overwhelmingly pervasive perception of the gender binary, which necessitates the existence of only two genders, genderqueer identity as a concept is most frequently either ignored or punished, through a social process called gender borderism. Gender borderism's oppression and suppression of non-binary gender identity competes, for genderqueer individuals, with the intrinsic desire to have one's identity acknowledged and understood by others in the form of social recognition in a Hegelian sense. In order to generate a conceptualization of Gender that is encompassing and respectful of all gender identities, including those which do not organize themselves around the gender binary, the concept of gender recognition will need to be significantly reconfigured, principally in the form of the acknowledgement that sameness cannot be the cornerstone of an experience as personal and particular as gender.