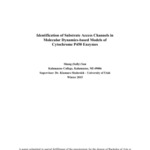 Structure-based computational models of cytochrome P450 enzymes are effective tools to study structure-function relationship of P450s. To understand enzyme-substrate interaction and conformation of active site, channels in both crystal structures and molecular dynamics-based structures were studied for all human drug-metabolizing P450 published in and before 2012. Channels were computed using CAVER 3.0 and classified using the nomenclature developed by Wade and co-workers. Because the goal was to study all channels in 455 structures with various parameters, an automated procedure written in shell script under Linux environment was development to classify tunnel clusters computed by CAVER 3.0. All channels computed with a set of parameters were manually checked to test the script. It was observed that channel opening and closing varied within P450 species and across P450 species. Docking studies with prototypical substrates will be used to rank the structures based on previously published mechanism information.