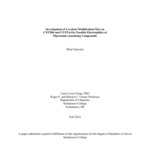 Cytochrome P450s (CYPs) are heme-containing enzymes that metabolize small organic molecules including drugs. CYP3A4 and CYP2D6 are responsible for metabolism of more than 70% of pharmaceutical drugs and inactivation of these enzymes can lead to drug-drug interactions. The substituted imidazole compounds, 5-fluoro-2-[4-[(2-phenyl-1H-imidazol-5- yl)methyl]-1-piperazinyl]pyrimidine (SCH 66712) and 1-[(2-ethyl-4-methyl-1H-imidazol-5- yl)methyl]-4-[4-(trifluoromethyl)-2-pyridinyl]piperazine (EMTPP), have been previously identified as mechanism based inactivators (MBI) of CYP2D6. The current study investigates sites of covalent modification on CYP2D6 and CYP3A4 by possible electrophiles of SCH 66712 and EMTPP. Whole protein MS analysis of inactivated CYP2D6 and CYP3A4 was consistent with the binding stoichiometry of 1:1. Nano-MS analysis of digested inactivated protein yielded 60% sequence coverage for CYP3A4 and 65% sequence coverage for CYP2D6. However, the sites of covalent modification were not determined. Studies of SCH 66712 and EMTPP metabolites with CYP3A4 showed formation of four monooxygenated SCH 66712 metabolites and eight monooxygenated EMTPP metabolites. Further analysis by MSn confirmed three of monooxygenation sites on the piperazine end of SCH 66712 and four of monooxygenation sites on the piperazine end of EMTPP. TiCl3 experiments suggested that one of the monooxygenated products of SCH 66712 and of EMTPP were the result of N-hydroxylation. The exact site of metabolism of EMTPP on a nitrogen atom of the heteroaromatic ring was confirmed. Additionally, docking simulations were performed and inactivation mechanisms of enzymes by possible electrophiles of SCH 66712 and EMTPP were proposed.