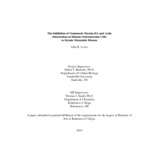 The state of a cancer and whether or not it has metastasized often defines a patient’s prognosis. Were the mechanism of metastasis better understood on a mechanistic level, novel treatments could be more efficiently elucidated. The most basic element of metastasis is the physical movement of cancer cells from the main tumor mass to another part of the body via the bloodstream. So, how can we prevent a given cell’s movement? Movement within a cell is created from sarcomeric-like contractions in the lamellipodium (a cell’s outermost section) generated from filaments consisting of both actin and nonmuscle myosin IIA. These filaments generate significantly more force if they cooperate by arranging into a contractile series or a “stack”. Nonmuscle myosin IIA ATPase inhibitor Blebbistatin was used at several concentrations to inhibit stack formation in U2OS cells to varying degrees, thereby demonstrating that Blebbistatin’s target site, the ATPase pocket located on the head of myosin II, is essential to stack formation. A secondary investigation was performed in U2OS cells by probing Heat Shock Protein 90 (Hsp90) and its role in folding actin polymers through the Hsp90 inhibitor Tanespimycin. Tanespimycin was applied to the cells at several concentrat