Effects of Loading Value of Wang Resins on the Resolution of Benzoin and α-Benzoin Oxime Using (R,R)-Diaminocyclohexane (DACH) Derivatives 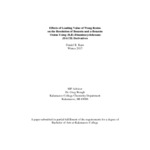 (R,R)-Diaminocyclohexane (DACH) is a well-studied chiral reagent used in asymmetric synthesis and resolution of enantiopure product. The monobenzylation product of (R,R)-DACH with 3,4-dimethoxybenzaldehyde was linked to the polystyrene resin Wang in order to conduct solid phase chemistry resulting in a chemical environment more favorable to R-benzoin and R-α benzoin oxime. Racemic benzoin and α-benzoin oxime were resolved with the synthetic resin and bound via hydrogen bonding. Wang resins containing three different loading values 1.06, 0.96, and 0.87 mmol/mg were tested to determine the effects of resin substitution on the enantiomeric excess or reagent bound. The resins were stripped of their hydrogen bound reagents which were separated using High performance liquid chromatography on a chiral column. Ultraviolet/visible light absorbance measurements found that in all cases the resin bound the (R)-benzoin and oxime enantiomer in excess. Between resins, there was no significant difference in affinity for (R) oxime, but there were significant differences between resins of various loading values for benzoin.