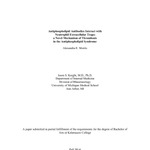 Antiphospholipid syndrome is an autoimmune disorder that causes thrombosis and pregnancy complications with no targeted treatment available. Antiphospholipid antibodies (aPLs) against β2GPI have been known to activate monocytes, platelets, and endothelial cells, leading to vascular damage and clot formation. Neutrophil extracellular traps (NETs) are a recently discovered phenomenon known to have both arterial and venous pro-thrombotic implications, however their relationship with aPLs has not been previously studied. This research examined the link between aPLs and neutrophils, investigating whether these antibodies induce NET formation, leading to thrombosis. Indeed, β2GPI was found on both resting neutrophils and NETs and β2GPI appears to be present at extremely high levels when NETs are induced in the presence of plasma. Furthermore, β2GPI-DNA complexes form not just in vitro, but were also detected at significantly higher levels in APS plasma and serum samples as compared to healthy controls. Additionally, β2GPI appears to co-localize with CD32a on neutrophils with potential for modulating downstream effects. Thus, it was determined that aPLs interact with NETs, providing the basis for a novel therapeutic target for APS.