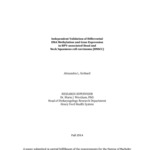 Head and neck cancer, specifically Squamous cell carcinoma (HNSCC), is one of the leading cancers in the United States and contributes greatly to the mortality count each year. Human Papillomavirus (HPV) has been confirmed to be an independent risk factor of HSNCC. HPV positive HNSCC (HPV+HNSCC) has a distinct etiological profile, and a prognostic advantage compared to that of HPV negative HNSCC (HPV-HNSCC). Epigenetic alterations, specifically DNA promoter methylation at Cytosine-phosphate-Guanine (CpG) sites, are thought to play a role in the differences between these two subtypes of HNSCC. This study’s objective was to examine the methylation status of 11 genes previously determined by Lechner et al., 2012 as significantly differentially methylated between HPV+HNSCC and HPV-HNSCC tumor samples in an independent cohort, and to assess whether their methylation status (hypermethylated versus hypomethylated) and corresponding micro RNA (mRNA) expression levels indicated concordance (agreement) for potential translation to the clinic setting. Global methylation profiling of 4 HPV+HNSCC and 4 HPV-HNSCC confirmed significant differential methylation for 7 of the 11 genes. Statistically significant differential expression for 7 of the 11 genes was noted in HPV-HNSCC versus Normal and for 6 of the 11 genes in HPV+HNSCC versus Normal samples. In the HPV+HNSCC versus the HPV-HNSCC group, none of the 11 genes showed statistically differential gene expression, though trends of directionality (agreement with methylation status) were observed. There was no significant correlation between gene methylation and expression for the 12 samples in the 450K cohort (4 HPV+HNSCC, 4 HPV-HNSCC, 4 Normal). Despite lack of correlation between methylation and gene expression, the significant differential methylation of 7 genes indicates noteworthy independent confirmation of Lechner’s findings. Also, genes CRMP1, MEI1, PCDH10, and PCDHB11 were commonly differentially expressed with similar directionality of expression (high) between HPV+HNSCC and Normal, and HPV-HNSCC and Normal samples, and favors implication of these genes in the pathogenesis of HNSCC regardless of HPV status. The latter suggests a basis for continued study of the relationship between the methylation and gene expression levels of these 11 genes in HNSCC. Ideally, some of these genes may have the potential to become not only biomarkers for HNSCC, but also biomarkers that differentiate HPV+HNSCC from HPV-HNSCC.