The Cultural Conquest of Mexico : Friar and Encomendero in New Spain, 1511-1695 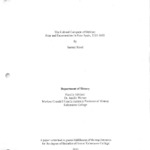 For millennia, what we now refer to as Mexico remained isolated from the rest of the world. Over this time, the Aztec, Mayan, and Olmec Empires independently created systems of language, writing, mathematics, agriculture, government, astronomy, and a detailed and inclusive religion that encompassed all traditions and deities throughout the empire and engendered a detailed civic system, which persisted until the 16lh century and the arrival of Hernan Cortes. Cortes, a young Castilian explorer, arrived with a complement of 508 soldiers armed with crossbows, arquebuses, swords, pole arms, and cannons. Within two years Cortes had control of the Aztec capital of Tenochtitlan and had left a trail of destruction and desecration in his wake. This desolation was followed soon after by a rebuilding process orchestrated by conquistadores and Catholic friars, through which almost all evidence of the Aztec Empire's complex social system developed over thousands of years was destroyed, subverted, or assimilated. It is through this cultural conquest that Mexican history for the next five hundred years would be defined. On the Spanish side, the origins of this conquest came from papal desire for new converts and regal desire for land and riches. The first friars to arrive in Mexico came before Cortes, and within forty years 802 religious in 160 convents populated the land." The primary goal of these religious was to convert the native Aztecs to Catholicism, but they soon discovered that this would not be possible without intentionally and systematically replacing the native culture as well. Spanish cathedrals were built atop the ruins of indigenous temples, emphasizing the absolute domination of the Church over the indigenous religion. Without incorporation of Christian elements, the important rite of indigenous fiestas posed a danger to Catholic regional authority. Indigenous languages inhibited the teaching abilities of the friars, pushing Spanish language education as one of the most important facets of the conversion. The conquistadors also played a major part in this cultural destruction and rebuilding. Aside from the initial divisions caused by Hernan Cortes' use of enemy tribes in his taking of Tenochtitlan and his deception and misleading of the imperial and local leadership, conquistadores established encomiendas, either supervising or outright replacing the leadership of an ancient form of community oversight known as caciques. They also served as the disciplinarians of the indigenous, whipping and torturing native peoples who did not follow their commands. In the process of the conversion and subversion of the culture of the native peoples of Mexico, conquistadors used their brute strength to force the native communities into submission. These two groups - conquistadors and friars - working in tandem, forced the overthrow and reshaping of an evolved and highly developed culture and the transplant of an entirely different way of life that largely persists to this day. Although the government changed the power structure that privileged the church above the common people in the 19M century, it was not until the 1920s - four hundred years after the arrival of Cortes - that a popular movement in Mexico began to reclaim their independence from the Catholic Church, and still longer for the indigenous communities of Mexico to change their system of governance imposed by the Catholic Church.