Monetary and Fiscal Policy in the European Union : A look into the Policy Surrounding the Great Recession. 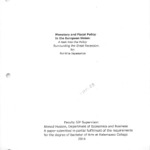