The Economics of Exclusive Territories Arrangements : The Case of the U.S. Brewing Industry 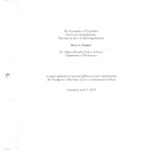 The American brewing industry has been heavily regulated since the end of Prohibition. One such regulation is the three-tier system. This system mandates separation between brewers, distributors, and retailers of beer. As a result, relationships amongst these firms are clearly defined. These vertical relationships are of special interest to industrial organization economists. One particular relationship is an exclusive territory arrangement, an agreement between a brewer and a distributor assigning the distributor to a territory that cannot be encroached upon by competing distributors. An exclusive territory agreement effectively creates a regional monopoly for the distributor in question. Through developing an understanding of the brewing industry and the economics behind vertical restraints, a set of assumptions and models are created to examine the rationale behind exclusive territories agreements. The models indicate that brewers enact exclusive territory arrangements to incentivize the implementation of distributor provided promotional services that increase quality and sales. These services include quality maintenance, local advertising, and obtaining preferential shelf space. However, by providing downstream market power the distributors increase their price, increasing the final retail price and decreasing total quantity demanded. It is hypothesized that brewers enact exclusive territory agreements in order to incentivize their distributors to increase the provision of demand enhancing promotional services. Empirical evidence corresponds with the pro-competitive view of exclusive territories arrangements, indicating that these contracts correlate to an increase in demand, higher prices, and higher profits. These quantitative values aptly describe the economic nature of exclusive territories arrangements.