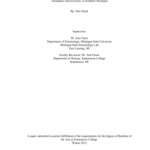 Agrilus planipennis Fairemaire (Coleoptera: Buprestidae), emerald ash borer (EAB), is an Asian species whose larvae consume the phloem of ash trees. Emerald ash borer was brought to North America in the early 1990s, and it has since spread across North America, killing tens of millions of native ash trees (Fraxinus spp). As an invasive species, the potential effects of EAB on North American biodiversity are unknown. Carabidae (Order: Coleoptera), a family of large ground beetles, serve as useful invertebrate biodiversity indicators. This study explored how ash mortality, as a result of EAB invasion, affected Carabidae species abundance and diversity in the Lower Peninsula of Michigan. Using pitfall traps, Carabidae populations from eight different sites across Michigan’s Lower Peninsula containing living and dead ash were sampled over a period of ten weeks, from June to September of 2014. Within each site, two plots were selected, one with and one without a canopy. Sites were located within the core, crest, and cusp of EAB invasion. Only data from three sites were analyzed due to trap flooding at the other sites. The study hypothesizes that greater Carabidae diversity and abundance would be found in plots with an intact canopy than in plots with a canopy gap. It also hypothesizes that Carabidae diversity and abundance would be highest in sites located in the cusp of EAB invasion and lowest in sites located in the core. Carabidae species diversity and abundance were greater in plots with intact canopies. Greatest Carabidae abundance was found at a cusp site, but highest Carabidae species diversity was in a core site. Within twenty years of its arrival, EAB has affected invertebrate biodiversity and community composition at some wooded sites in southern Michigan. The future effects of EAB in North American ecosystems are currently unknown.