Films and Propaganda : Analyzing Spain's Message To Youth During the Franco Regime 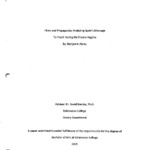 The Spanish government from 1936 to 1975 has remained a largely unexplored area of European history. Although the ruling party of Spain was founded around the same time as the Nazi party in Germany and the Italian Fascist Party in Italy, it is often mentioned briefly alongside these regimes, or many times not at all. Originally founded as a fascist party, the Falange Espahola would outlive the regimes of both Italy and Germany by many years. While originally founded as a fascist party, changes in party leadership during the Spanish Civil War from 1936 to 1939 drastically changed the leadership and composition of the party. Although the name Falange remained, there is a big question of exactly how fascist the Falange and its leaders were during their control over Spain. This study focuses on the youthful aspect of fascism in both Germany and Italy as a point of comparison between the Spanish Falange and the regimes of the Nazis and the Italian Fascists. It goes beyond simply exploring the lives of youth within organizations such as the Frente de Juventudes and the Seccion Femenina, and uses some of the propaganda and films that were created during this era to explore what messages the Falange party and the Franco regime hoped to instill in the minds of Spanish youth under their control.