Opposing the Inevitable : Margaret Thatcher and the British Opposition to German Reunification 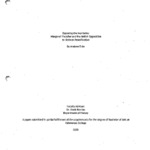 The author uses recently released documents from the U. S. National Security Archives and British National Archives to explore the role of British Prime Minister Margaret Thatcher’s role in the German unification process. In contrast to her colleagues from the Soviet Union, the United States, and France, Thatcher ardently opposed German unification and, according to the author, many of her reservations have come to fruition in the years since 1989. This work seeks to situate Margaret Thatcher as a leader of her time, whose personal convictions and childhood experiences informed political decision making. That said, Thatcher's views went far beyond blind adherence to experienced history. German unification posed myriad issues to Great Britain's contemporary political, security, and economic landscape. As such, Thatcher's motivations stemmed largely from realist notions of international politics and an unrelenting dedication to British interests. Thatcher's modern portrayal as a frigid woman who could not see beyond her own prejudices is only partially true. Many historians utilize this antiquated perception of Thatcher simply because it's straightforward, simplistic, and saves time that could be deployed for other research. It's much easier to quote a line from Thatcher's biography and note a handful of newspaper articles than to truly explore Thatcher's reasoning and its ramifications. Similarly, most historians writing on the late 20th century lived through the period in question. Even if done unconsciously, authors wrote based on what they witnessed, primarily a grand narrative situated around German and American leadership. Moreover, historians are not above individual prejudices. Personal biases against the Prime Minister and her political policies likely contributed to a lack of consideration and relative disappearance, of her thoughts from the period's narrative. Regardless of personal beliefs, one must recognize the Prime Minister's views as the conscious and conscientious decisions of a dedicated stateswoman who simply resisted seemingly irresistible historical trends. Thatcher claimed "if there is one instance in which a foreign policy I pursued met with unambiguous failure, it was my policy on German unification." Possibly, the greatest error for Margaret Thatcher was not her position but her inability to relent and adapt when it became clear that her view no longer held weight on the international scene.