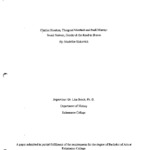 Brown v. Board of Education, a memorable and critical turning point in Black America's fight for equal rights and treatment in the United States of America, is a widely explored topic with countless publications examining its innovation in civil rights law. The case is remembered for setting important precedents that changed the face of the history in the United States. This case is known for its introduction of the use of social scientific evidence in the courtroom, which validated the research and the value of the social sciences in working to determine the rule of law. Led by the NAACP's dedicated fight to end segregation, Charles Hamilton Houston and Thurgood Marshall battled a variety of civil rights cases and set the stage for the Brown v. Board of Education legal judgment to take effect. The strategy to introduce sociology to the courtroom as supporting evidence is remembered as the handiwork of these men of the NAACP. But the author argues that victory would have been impossible without the contribution of civil right activist, lawyer, and Episcopal minister Pauli Murray.