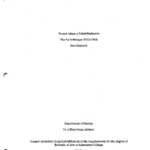 The author discusses the history behind the construction of the Grand Mosquee in Paris by the government of France’s Third Republic in the 1920s. At first glance, the building of the Mosquee de Paris seems to counter much of what the French government stood for in the Interwar period. But a closer look at France’s relationship with its colonies suggests different, more nuanced ideas about the place of religion and the colonies in mainland France. The Mosquee de Paris reflected the will of its builders, French government officials from Paris and the colonies as well as elite colonials, who aimed to create a sanctified, official French Islam.