The Incorporation of Rituals Into Holocaust Commemoration Ceremonies 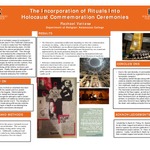 Currently there is a lack of scholarly research conducted in examining emerging rituals used in Yom HaShoah (Holocaust) memorial ceremonies. In order to study how Yom HaShoah rituals have developed over the last seventy years, it is first necessary to contextualize the various perspectives, which religious scholars regard the Holocaust with. Then through applying ritual theories and analyzing the uniqueness of the Holocaust in relation to other tragedies in Jewish history can the developing Yom HaShoah traditions be understood. The arising rituals used in Holocaust commemoration ceremonies include both Jewish liturgies as well as secular customs, thus allowing both Jewish and Gentile global communities to participate in memorializing all the victims, survivors, and rescuers of the Holocaust. Finally, this paper attempts to shift the focus from the political and historical causes of the Holocaust and instead towards analyzing Yom HaShoah rituals.