“And What of the Brown Skins?” An Analysis of Race, Gender and Sexuality in “Love and Rockets” 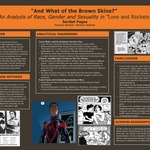 Comic books and graphic novels have been an increasingly visible part of the landscape of popular culture in the last few decades. Now with movies and television shows, the idea of the comic book and the archetype of the superhero is more entrenched in the social landscape than ever before. But there has been a surprising dearth of characters of color or expressions of nonnormative sexualities. But this has been changing rapidly as of late. With characters like Miles Morales (New 52’s Spiderman), Virgil Hawkins (Static Shock), and Kamala Khan (Ms. Marvel), there have been some advances of prominent characters in mainstream comic books. I used the text of the 1989 comic book series Love and Rockets in order to analyze both how racialized and queer bodies are depicted in such comics as well as how this work itself played into the history of representation in comics books. I then looked at what comic books have been doing after the publication of Love and Rockets, in the ’90s and into the modern day, looking at how creators who come from within these marginalized groups are carving out a place for themselves where they can tell stories that show groups in a sympathetic light.