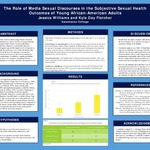 The current study examined the extent to which young African-American adults receive abstinence, relational sex, and sex-positive messages through the media, as well as, determined which of those sexual socialization discourses are associated with their subjective sexual health outcomes. Results determined that participants reported the highest level of exposure to sex-positive messages through the media, however, results determined that there was no association between the level of exposure to sex-positive messages and the level of sexual assertiveness or the level of condom use self-efficacy reported by the participants. In addition, a significant finding was revealed during analysis; there was a negative correlation between participants’ exposure to relational sex messages and their self-reported levels of sexual assertiveness.