Homelessness: A Narrative on Experiencing and Constructing Life Trajectories 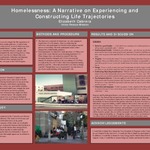 The purpose of this study was to investigate the life experiences of homeless individuals and their similar pathways. A total of nine homeless participants were interviewed, seven of whom were men and two were women. Grounded theory “coding” analyzes the interviews and in that process identifies themes, concepts, and experiences that emerge throughout the interviewing process. Drug use and psychological distress were the two themes that were present in eight out of nine participants. Education and language were one of the unexpected themes that emerged from the interviews. Most participants were part of the URM Program.