Do bees prefer spotted knapweed over other co-flowering plant species? 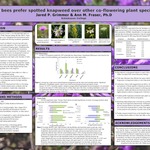 Spotted knapweed (Centaurea stoebe L.) is a biennial herb native to Eurasia that was introduced to North America during the late 1800’s. Since then, the knapweed has become a very widespread and successful invasive species, threatening native wild plants and thriving in pastures, grasslands, and prairie ecosystems. In Michigan (MI), the weed’s proliferative success has cultivated intense controversy into its control and eradication. The weed negatively impacts livestock as a menace of potential foraging space. Simultaneously, knapweed flowers are highly attractive to bees, specifically honeybees; therefore the plant’s presence is of extreme importance for beekeepers. As a dominant national honey producer, the concern over knapweed’s removal in MI is anything but trivial and has led to much research addressing strategies to both sustain bee populations and improve the diversity of wild flora statewide. My research aimed to contribute to the knowledge of knapweed’s allure to pollinators. To my knowledge, no study has examined the volatile profile of spotted knapweed and its role in attracting bee pollinators. With the goal of producing information about the relationships between bees, knapweed, and other flowering plants, this work sought to: 1. document the attractiveness of knapweed to bees relative to other co-flowering plant species in a natural field setting 2. compare the attractiveness of knapweed’s floral scent to native bumblebees (Bombus spp.) and European honeybees (Apis Mellifera L.) relative to four specific co-occurring plant species through multiple choice-tests in a laboratory setting 3. compare the volatile production by knapweed and other co-flowering plant species to determine whether attractiveness correlates with the amount of scent production or presence of particular compounds