Retrenchment at the Ivory Tower and the Perseverance of Resistance by Black Scholars : a Tale of Inextricable Despair and Hope For Critical Race Theory 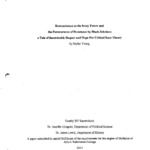 This paper seeks to explain how liberals, conservatives, and critical race theorists interacted in both legal academia and within constitutional scholarship. The legal world— and society more generally— was ravaged by culture wars in the 1980s and 1990s that pitted different groups against each other. Most notably, liberal thought was under a sustained attack from conservatives with the rise of originalism as well as from the radical left, including Critical Legal Studies and CRT. While CRT formed as a reaction to the dissatisfaction with racial inequality following the 1950s and 1960s, "within the predominantly white law school culture.. . the law's 'embrace' of civil rights from the Warren Court era was proclaimed as the very hallmark Of justice under the rule of law." Examining Harvard Law School's history with CRT reveals how this predominantly white institution grappled with a changing social context that challenged the institution's racial supremacy. There existed, then, a tripartite conflict between liberal theory, conservative theory, and radical theory from the left that included critical legal studies and critical race theory. All of these groups criticized each other and were in dialogue with one another through articles they produced in elite law reviews. Due to the criticism from conservatives, the co-optation by liberals and the lack of historiography about CRT, this paper analyzes CRT during the turbulent last decades of the twentieth century. Thus, to what extent was CRT successful in transforming the legal culture that had been dominated by whites since the founding of this nation? This paper argues there was an inextricable link between the activism of students and professors in pushing for diversity in hiring practices and the scholarly work simultaneously being produced within CRT. How does combining both the emerging theories of originalism, CRT, and CLS, and the precariousness of liberal thought with the activism and protests at Harvard add to the understanding of CRT and its impact on transforming law school culture? This analysis reveals an unprecedented process of serious debate occurring between scholars of varying ideologies, often members together on the same faculty, through the means of combative and targeted articles on the subject of race and the law. Thus, CRT transformed the legal culture at elite law institutions by cementing the experiences of minorities, both male and female, inspiring a new generation of critical race theorists and influencing off-shoot movements, including Latino Critical Studies and Asian Critical Studies, at a time when conservatism in law and in politics more generally concretized power. This in turn legitimized CRT within the confines of law schools, not from liberal or conservative support, but due to the increasing voice minorities were attaining as both students and professors. More broadly, this paper seeks to show CRT to be a continuation of the narrative of the civil rights movement in American history. The urgency and necessity in telling this story is pertinent to counter the recent and disparaging critique of CRT by the right, and the silencing of CRT by liberal scholars who have co-opted some of its ideas without due credit. The historiography outside of CRT is rare, and the existing articles and books are littered with myths about the movement that serve to slight its complexity and the impact it continues to have. While CRT scholarship tackles various constitutional questions, this paper will mainly address critical race theorists' defense of the constitutionality of affirmative action. The focus on affirmative action is significant for two reasons. First, following the civil rights movement of the 1950s and 1960s, affirmative action became the new and arguably most controversial battle for civil rights law in the 1980s and 1990s. Second, debate over affirmative action coincided with the development of CRT both as an ideology within constitutional theory and as a movement at Harvard and other law institutions. In turn, critical race theorists' experiences, both as law students and then as professors, serve to de-mystify anti-affirmative action rhetoric.