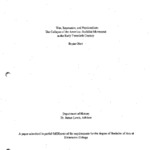 The socialist movement in the United States was never monolithic in terms of its ideology, demographics, or geography, and it suffered from intense and often debilitating factional struggles. Historians have attempted to pinpoint the dichotomies in American socialism in order to help explain the apparent failure of the socialist movement in the United States: evolutionist or gradualist vs. revolutionist, intellectual or bourgeois vs. proletariat, native vs. foreign-born, East vs. West. These dichotomies are accurate, but they also lead to oversimplification. They remain useful, however, because they highlight the inability of each socialist faction to instill American workers with their particular ideology, be it democratic socialism, revolutionary socialism, syndicalism, or De Leonism. Socialists met with success at the polls and increased their membership when they appealed to the immediate needs of the working class; most of the workers who cast their votes for socialist candidates were not typically members of the Socialist Party of America or of any other group. At the start of the First World War in the summer of 1914, socialists seemed relatively secure in their position in American politics; they had had their most successful electoral season ever just two years earlier. However, by the final months of 1919, socialists had experienced a series of reversals that threatened the survival of the movement. A dramatic and sudden shift in American political ideology and public opinion accompanied President Woodrow Wilson's declaration of war on the Central Powers in April 1917. Correspondingly, American socialism experienced an equally dramatic change, not so much a shift as a splintering. The debates that had already existed reached a crescendo, fracturing the movement even further and almost completely removing any ability to affect political change.