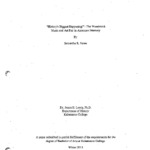 Some historians have concluded that the way in which a culture remembers an event is more important to a culture than how it actually happened. The collective memory that differs from reality can communicate the values and the ideals of the culture. A society's memory of a historical event - the collective memory - is formed as a combination of individuals' personal recollections and a broader public memory, established symbolically through media representations of the event. In the case of Woodstock, the memory has been constructed by both the documentary and the words of those involved in the festival's creation, especially those of promoter Michael Lang. It has been continually protected, thereby presenting the memory of Woodstock that they would like to preserve. This is a study of the Woodstock Music and Art Fair of 1969 as it appears in American memory. The author explores the way it has been remembered, and more importantly, why; seeking to discover what it is about Woodstock that keeps it relevant in American culture, and in the American collective memory. It is clear that the word "Woodstock" is now a symbol for something much larger. It continually inspires people to believe in the possibilities of the world. For some, like Michael Lang, it has become their raison d'etre. The author sets out to understand why using contemporary media reports and the memories of the festival's central figures.