The Lives of Johnnie Fedora and Alice Bluebonnet: A Social History of Hats in Early to Mid-Twentieth Century America 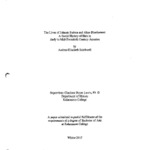 Taking her title from a 1954 Disney cartoon short featuring two characters that epitomize the iconic nature of hats in mid-19th century America, the author traces the social and economic importance of the hat from the 1920s to the 1960s. Hats retained symbolic social status throughout most of the twentieth century, and only "died" in the mid-1960s, when a combination of emerging structures from the postwar era coalesced to render them meaningless. Hats reflected the rapidly changing cultural ideals and social upheaval of the twentieth century. As ideas about femininity and masculinity shifted from the dominant Victorian concepts, dress also changed. Hats were merely part of the change, but can be used as a potentially useful tool to examine the ways in which cultural norms of femininity and masculinity transformed over the early and mid-twentieth century.