Mothering the Masses: The Influence of Middle-Class Ideology at Hull House during the Progressive Era 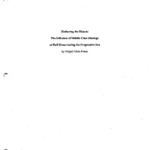 The author discusses the work of Jane Addams and Hull House in Chicago, focusing on how programs were shaped by female and child-centered middle classes values, and how the women of Hull House were able to garner greater social influence following their residencies chiefly because their work at the settlement house aimed not only to help Chicago's poor, but also to combat poverty and social ills on a more national scale through their research and reform work. Addams and her peers aimed to help those in need at both an interpersonal level and a political one; by virtue of their aim to better inform the public, their efforts suggested that the general population, middle- and upper-class America, was not aware of the living and working conditions of the poor and that Hull House's relieving them of their ignorance would inspire others to help alleviate the situation. This perspective asserted that the poor, or at least some of the poor, could advance socioeconomically, culturally, and politically and become a part of the American middle class with the proper guidance and assistance from wealthier members of society. This sentiment reflects a larger problematic trend in Hull House reform work that centered around the insertion of middle-class expectations into poorer communities in order to improve their lives. This is not to say that Addams and her fellow residents did not truly help many of Hull House's beneficiaries, but rather that their work emerged from a middle- and upper-class perspective and, as a result, reflected class-based cultural standards and ideologies.