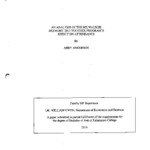 The 2013 MLB season was a particularly difficult season for the Milwaukee Brewers baseball organization. Poor season performance and Ryan Braun's performance enhancing drug scandal were difficult for the organization and its fans. In response to Ryan Braun's suspension for the remainder of 2013, the Brewers organization released a voucher program to incentivize greater attendance for home games and to give back to their fans. The hypothesis is that the voucher program made the organization money and brought more fans into Miller Park, the Brewers' home stadium. In order to analyze whether this program worked, attendance numbers from the past 5 seasons were analyzed. This analysis found that the voucher program effectively increased attendance in August.