Radio Shows: Race and Ethnicity and Political Programing from 1929-1939 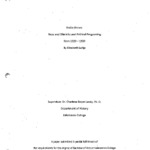 Radio was a successful medium for political programing, as well as the entertainment programing. Radio programs aided politicians by tapping into the potential of the connection and broad access to numbers of American listeners by speaking to them directly into their homes. Broadcasting information on his actions, F.D.R. used radio to connect with the previously neglected American population by including them in his intended actions and plans for relief. His sporadic broadcasts helped him to communicate with the public about what their government was doing for them and maintain support from American voters. While initial supporter of F.D.R, Charles E. Coughlin also used radio to get his political ideologies across to the public. A Catholic priest, Coughlin's programs were able to reach high levels of popularity because of his radio sermons that connected with Americans across the country to present his politically relevant sermons. His topics included the proper ways to conduct oneself as a Christian and the Catholic fight against bigotry. Whereas during the onset of the Depression shifted to speaking about capitalism, Anti-Semitism and communism. Radio's ability to develop into a massive cultural movement allowed for the construction of a unified American culture through the transmission of the same information. Information through the radio reached across class, geographic, and class lines. Radio's broad accessibility allowed for it to become a household item that by the market crash transitioned to a means of distraction from the stresses of everyday life. Listening to the same programs created strong radio followings and made radio a powerful medium to connect with the public which inspired the maintenance, perpetuation, and preservation of racial and ethnic prejudices. With a shift from the comedic antics of black faced actors of the Vaudeville stages to the growing popularity of radio programing, prejudice toward minority groups was able to transition to radio programing in a similar comedic, dramatic form as acts of Vaudeville. The representation of race and ethnicity in comedy and drama shows allowed for political leaders to take advantage of the widespread radio following and perceptions of race and ethnicity within white American radio culture to meet their own specific political agendas and achieve the desired outcome.