Skinny Jeans in the Sanctuary: Malleable and Solidified Boundaries in the "Hipster Christian" Subculture 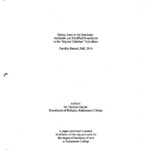 This is a project concerned with the creation of boundaries within subcultures. Subcultures, even the ones which eschew traditional markers of borders, must navigate the ways in which a group marks in and out status. In doing so, unintentional boundaries that keep certain groups from integrating into the subculture are erected. Hipster Christianity, particularly among American Evangelicals, attempts to blur the boundary between secular and religious culture - as evidenced through clothing and music choices, in many realms but often manifested on Sunday mornings- due to the American myth of individuality and a long Evangelical tradition of anti-institutionalism. Boundaries between religious and secular culture have continually changed and been reformed, and hipster Christianity is a recent phenomenon which focuses on removing the boundary between the two. While doing so, other borders are unexamined and reinforced, such as fault lines between generations, genders, classes, and races, as hipster Christianity is a movement created by and for white middle-class young people with distinct gender norms.