The American Redoubt Movement: Reestablishing the Nation under God 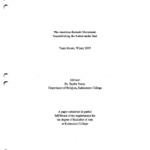 The author examines the American Redoubt movement focusing on the inherent connection between Christian religious faith and right wing political beliefs. The first chapter examines the Patriot movement, with emphasis on Ruby Ridge and Waco. The second chapter deals with the polarizing right wing response to President Barack Obama and how it reveals what the paper calls The American Cultural Myth. The third chapter examines the apocalypticism of the Redoubt Movement.The author examines the work of movement authors and broadcasters in order to present them as rational people responding to contemporary circumstances as well as a particular American historical tradition.