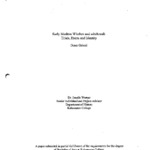 The first part of this paper will examine the differences in witchcraft persecution, and the second part will examine the overlooked similarities in witch-hunts and witchcraft beliefs. This paper strives to better understand why patterns of witch-hunts diverged in England and Scotland, but also endeavors to consider the ways in which the British beliefs overlapped with Continental ones. Britain had comparatively few executions and developed different witchcraft beliefs compared to those in Continental Europe. To understand how and why they differed, this paper examines witchcraft beliefs, patterns of witch-hunts, and legal procedures involved in the persecution and criminalization of witches. Continental Europe section examines the developing beliefs about witches and witchcraft. This examination requires an in-depth analysis of the Malleus Maleficarum by Heinrich Kramer and Jacob Sprenger, which reflects the more traditional and religious beliefs involving witches. England is divided into three sections: beliefs, laws, and the treatise by Reginald Scot's, Discovery of Witchcraft. Each section examines what witchcraft was in England, and emphasizes what makes English witch-hunts more secular and orderly. Scotland is examined as an amalgamation of Continental and English beliefs, due in part to its political ties with Denmark. This section is divided up to examine what witchcraft beliefs were in Scotland, how the accused witches were persecuted, and, through Daemonology, the treatise implemented under King James VI. This treatise reflects the upper-class beliefs that impacted the developing image of the witch.