Revenue Sharing and Its Impact on Competitive Balance in the MLB 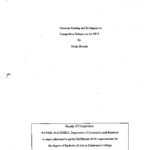