The Middle-Class Following the Great Recession: An Unequal Recovery in Kalamazoo City, Michigan 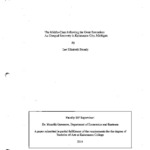 In the early 2000s the United States' housing market took off while at the same time borrowing requirements relaxed. These circumstances led to an increase in subprime and adjustable-rate mortgages. The number of people who used these mortgages to purchase a house, and particularly the number of people who used them to refinance their homes, significantly increased. Hence, when the housing bubble burst in 2007, the middle and lower classes were the ones most directly impacted. Following the Great Recession median wealth has not recovered at the same levels, yet upper class wealth has more than rebounded. This decline in the middle-class can be seen in cross-sectional and multivariate analyses at the national level. Nationally, median wealth plummeted over the years 2007 to 2010.The author uses a cross-sectional analysis of US Census data to examine if the impacts in Kalamazoo city, Michigan reflect national trends, finding that, while the middle class in Kalamazoo city are not as substantially burdened, they have not had a fair recovery following the Great Recession. in