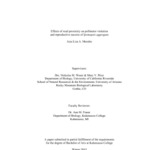 The development of infrastructure such as buildings, dams, and bridges, has been found to disrupt surrounding ecosystems. Current research has highlighted transportation infrastructure (e.g. road and highway networks) as having a wide range of effects on the behavior of animal populations in urban areas. This study investigated the possible effects of road proximity on pollinator visitation and the reproductive success, in terms of pollen deposition and seed set, of scarlet gilia (Ipomopsis aggregata). The hypothesis that proximity to the road would influence pollinator visitation and plant reproduction was tested. The author also evaluated the road environment in terms of noise produced by traffic on the road. Despite considerable levels of traffic, there was no significant effect of distance from the road on pollinator visitation. Similarly, there were no significant trends found in average pollen counts and seed sets according to distance from the road. However, noise levels were higher near the road, indicating that traffic noise does contribute to the surrounding acoustic environment. Compared to the daily cycle of traffic and associated increases in noise levels, overall pollinator visitation increased when traffic was at its lowest, suggesting that pollinators are intentionally foraging when noise levels are highest. As the field of road ecology grows and the effects of roads are better understood, studies such as this one could inform the future construction of road networks, particularly in rural areas and in areas continuing urbanization and improving roads. This investigation concludes that the effects of roads, particularly in terms of increased noise pollution, must continue to be studied in order to further our understanding of how the expansion of human infrastructure is potentially altering the surrounding natural environment.