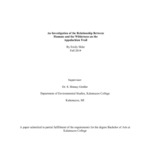 Many authors such as Aldo Leopold, E.O. Wilson, and Richard Louv have studied the connection between wilderness and humans. These authors conclude that this connection is intrinsic. The Appalachian Trail (AT) is a 2,183.5 mile trail stretching from Georgia to Maine. The trial’s length as well as wilderness setting and unique community create an environment in which humans have an opportunity to connect to nature. Many of the trail’s hikers, called thru hikers, intend to walk the entire trail within one season. The author describes these hikers as pilgrims. In order to study the relationship that evolves, she decided to thru hike the trail. While she hiked, she conducted interviews with fellow thru hikers. The interview topics ranged from personal experiences on trail to defining and describing a personal connection to nature. From the collected interviews, she was able to determine that, the Appalachian Trail is a pseudo-natural environment. The AT functionally provides a connection between humans and nature, but the surrounding land has clearly been altered by humans. This sort of representative nature allows humans who experience it to learn more about themselves and connect to the landscape as well as other people. The trail may not strictly adhere to the original intentions of its inventor, Benton MacKaye, but the trail achieves the ultimate goal intended by those who were able to successfully build trail, reflected in 16 USC 1241-1251.